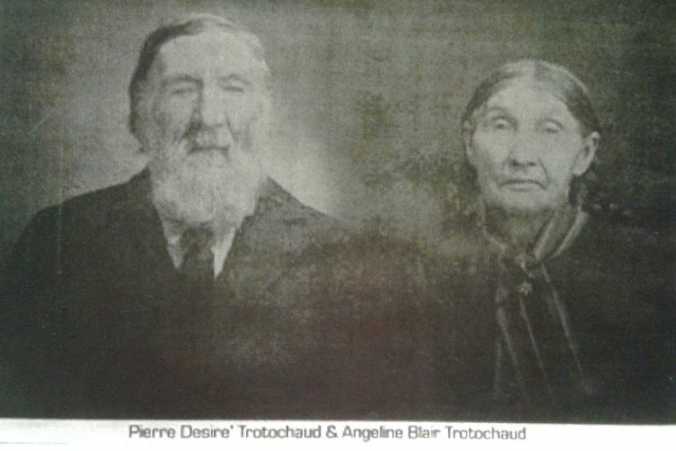 This photo, undated, was shared on Ancestry.com by Florence Howell in her Bellanger family tree. Florence is a descendant of Moses Trotochaud, a younger brother of Amelia, my great-great grandmother.

Sandy Lake was also the site of important trading posts during the fur trade era.  In 1794 the Northwest Company established a post on the west shore of the lake that remained in operation until after the War of 1812.  A law passed in 1816 required all trading with Indians be conducted by American citizens, which forced the Northwest Company to sell its holdings in the U.S. to John Jacob Astor. Astor’s American Fur Company operated the old fort for several years before establishing a new fort on the Sandy River, which connects Sandy Lake to the Mississippi. Several other independent trading houses also may have existed in the area.

The trading posts are important to our family’s story because it is likely that Margaret met Alexander Blair at one these posts. According to government records, Blair is listed as the father of Margaret’s four children: Angeline (born 1819), Antoine (1827?), Edward (1829?) and Alex (1840?).  Given the time span between the oldest and youngest, it appears that Margaret and Alexander had a long-term relationship.

Unfortunately, I have found no solid information for Alexander beyond his name.  Having read as much as I can about the fur trade in the early 19th century, including employee lists of the trading companies, I have yet to find any mention of him. I have found other potential clues. There was an Alexander Blair who served in Canada in the British army during the War of 1812. Is it possible that our Alexander stayed behind after the war? There are also a couple of Alexander Blairs who show up in city directories for Detroit and other cities in Michigan and upstate New York in the 1840s and 1850s.  Was our Alexander one of many white men who, after making their fortune in the fur trade, abandoned their native families and returned to “civilization” to start another life? It is unlikely that I will find any connections between these men and our family, but I’ll keep looking.

Unfortunately, there is also little information about Margaret.  Her name shows up in the “Half-Breed Scrip” report, which investigated the use of scrip to issue land claims under the 1854 Treaty. The investigating commission had as one of their sources a trader named Peter Roy, who claimed to know Margaret. Roy stated that she and her three children who filed claims for scrip in 1864 were from Sandy Lake and were mixed blood Ojibwe of Lake Superior.  The commission ruled that Margaret was not eligible for scrip because Margaret was married before 1854, and therefore was not a head of household when the treaty was signed. Apparently, because Margaret was ineligible for scrip, the claims of her children were also rejected. Census records indicate that Margaret lived with one of her sons through at least 1870 and the sons and her daughter all settled together at Little Rock Lake north of present-day Sauk Rapids (the next part of the story will be in a future post).

My sense is that Alexander Blair died at Sandy Lake. I have no way of verifying this, of course. The burial grounds at Sandy Lake have long since been covered up by lake homes and condos.  Or was he buried along side a trail or portage somewhere? Did he drown? There are many possibilities, all of which suggest Alexander Blair was one of many men involved in the fur trade who are lost to history.