Grandpa Ray and Grandma Arleen made deer camp a very special experience for their grandsons. They passed on to us a hunting heritage that will, hopefully, continue in our family for years to come. Grandma was the “voman in the voods” as one old Norwegian who encountered her in the woods put it. Indeed, a woman hunting back in the 50s and 60s was almost unheard of. But Grandma was out there, along with her daughters – even when they were pregnant. Grandma was a crack shot and brought many deer down with her lever-action .32 Winchester. She was also a wonderful camp cook who had us looking forward to every meal.

Grandpa was just as excited as us kids to go to camp. He started preparing sometimes as early as September, shopping for the best bargain beer he could find. It had to be cheap because he bought a lot of it – 25 cases or more each year. That is a lot of beer but we usually could count on a lot of visitors to our camp deep in the Beltrami Island State Forest near Roseau. There were the Weber cousins who camped a few mile south of us, the Hoaglund crew who had a cabin nearby, the McCleods from back home, and others who would stop by our camp to inquire about our hunt and drink a beer or three. That is when the stories came out.

Deer camp stories, whether told around a campfire or around the table in the cook shack, were the highlight of every evening. The storytelling was always a raucous affair, the storyteller getting louder with every round of beer. It was as if we were making up for all the quiet stillness we practiced during our morning hunts. Sometimes that was practiced stealth, and sometimes it was just trying to avoid any loud noise because we were hung over from the previous evening’s festivities. 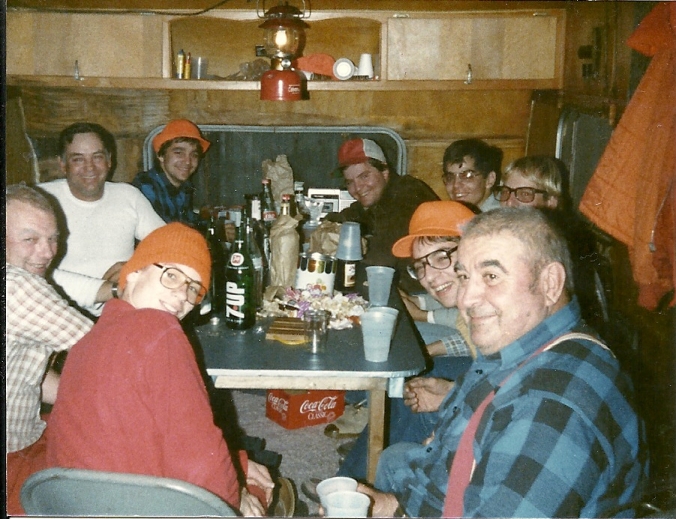 While Grandpa loved a good party in camp, he was serious about getting as much venison as we could. He put as many if not more hours in the deer stand as any of us. Grandpa was especially focused when it came to conducting drives. Both the drivers and the standers were given explicit instructions. Whether we got a deer or not, we could count on an extensive postmortem from Grandpa on what went right or wrong.

Grandpa was also adamant that we get everything out of the deer we could. All the bragging we wanted to do about our latest kill was usually stopped short when he asked if we remembered to harvest the tongue, the liver and especially the heart. Per Grandpa, these delicacies were not to be wasted. Grandma often made pickled heart right in camp, and sometimes fried up fresh liver for dinner (both acquired tastes as far as I was concerned).

Grandpa liked securing some “camp meat” too. This usually involved cutting up a fawn or small doe and consuming it all during the week of camp. The way Grandpa saw it, nothing was better than fresh venison and there was no sense in wasting a tag on a small deer. That being said, Grandpa usually asked one of his sons-in-law secure the deer in an out-of-the-way place and butcher it there so as to avoid incriminating himself.

Occasionally, over after-dinner drinks, Grandpa would wax philosophical.  He talked about how lucky we were to be able to hunt, to have public land to hunt.  He talked about how public land was not available in many other states he had visited.  He thoroughly enjoyed being out in the woods in a make-shift shack on wheels, eating simple but hearty meals, and sharing the experience with family. He was right; we were very fortunate.

When I got my first full-time job after college, I made sure I saved enough vacation time to go to deer camp. We encountered tough hunting conditions that year and for this and other reasons we decided to pull camp early in the week. Grandpa felt bad I had taken all my vacation time, so he and I hunted around his place. Later in the week, we checked out a place in the White Earth State Forest that Grandpa used to lease from the county for grouse and duck hunting. I shot a forkhorn buck that day and eventually we found a new place for our camp for the following year.

Unbeknownst to me at the time, that next year was the last time I got to hunt with Grandpa in Minnesota. The following year my career took our family further west, too far to come home for hunting. It would be another 11 years before I would be back for the Minnesota deer season.

Now, almost 30 years later, we are still hunting from the same camp. My dad is now the Grand Old Man of deer camp and my mom is now the cook. I still hunt with my brothers and cousins and now, our kids, maintaining the traditions we learned from Grandpa Ray.

We just don’t drink as much beer.