Shortly after Mel and I bought our 11.78 acres of brush and swamp nine years ago, I cut a loop trail through the woods.  Other than having to clear a few downed trees, all I had to do was cut some brush to clear a path.  This brush was actually shrubs and young trees vying for limited sunshine under the old basswoods that dominate our woods. At one point along the trail, I encountered some chest-high woody plants with nasty quarter-inch thorns.  I assumed these were hawthorn or some such thorny shrub, cut my way through them and moved on down the trail.

We used the trail in winter to cross-country ski and in spring to find emerging wildflowers. It only took about ten  minutes to make the loop on skis, but three such loops made for a decent morning workout.  I had to do a little maintenance every year, but I saw it as a good excuse to spend some time in the woods.

After we bought the defunct Emmaville Store six years ago, we found that getting time at the cabin was getting harder and harder to come by. Our little loop trail fell into disuse.

Last summer, after selling Emmaville as a going business, we came home to the cabin and a backlog of maintenance items. After working my way down the honey-do list, I finally made it back out to the woods.  Our trail had grown over again in many places. As I walked it and contemplated clearing it again, I came across a tall jungle of the same thorny bush I encountered eight years before. What was then a bathroom-sized patch was now an impenetrable tangle occupying nearly half an acre.  Some of the plants were approaching tree size.

Upon further inspection, I found that this mystery shrub was growing so densely that other shrubs and tree saplings were being excluded.  Whatever this thing was, it wasn’t good for our woods. I suspected it was buckthorn, an invasive plant that is becoming widespread in Minnesota.  But this plant did not match the description for buckthorn.

Eventually I identified the beast as prickly ash, a native species. I read that the plant is useful for herbal remedies (another name for it is “toothache tree”) and the larvae of some butterfly species favor it.  But, according to the Minnesota Wildflowers website, “the spreading, shallow root system will send up new suckers when not inhibited by competing vegetation, creating dense thickets of nearly impenetrable brush that tears at the hands, face and clothing.” Yep, that’s the one. 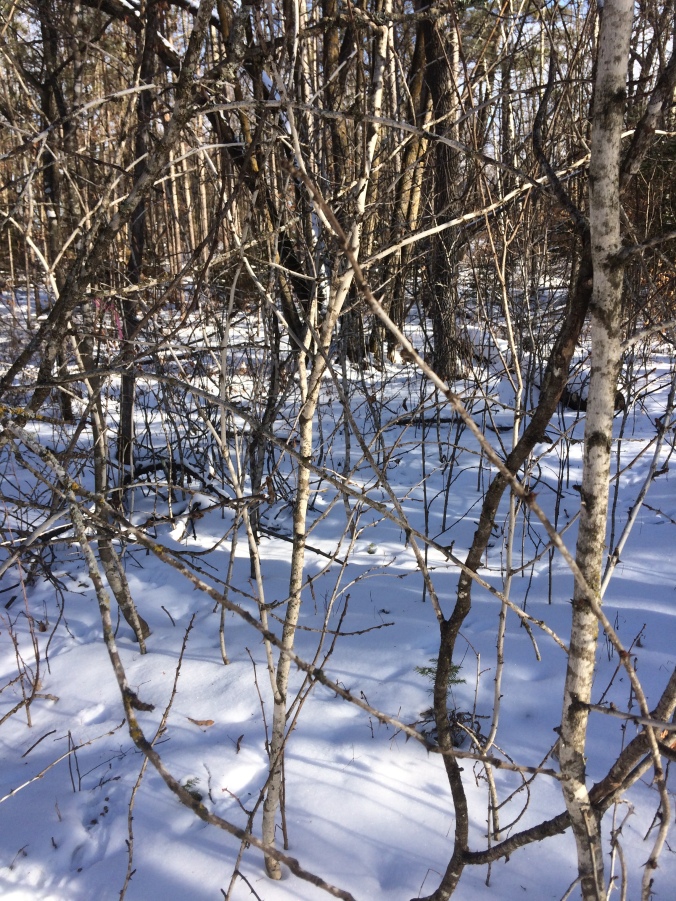 We have every intention of letting nature take its course in our woods.  But we want to make sure we have healthy trees coming up to replace the mature and over-mature trees.  The prickly ash is out-competing more desirable species such as maples, oaks, alders and dogwoods.  Also, we would like to walk in our woods without getting bloodied. I decided the prickly ash needs to be controlled.  I found out the hard way that just cutting it does no good, but probably encourages its spread. Also, losing the old basswoods and other trees to blowdown is creating new openings for prickly ash to occupy.

Late last summer I sprayed a 2,4-D based herbicide on the plants around the perimeter of the thicket to see if that would slow down its spread.  I’ll find out this spring if that worked. Everything I have read on-line suggests the best control is to cut the stems and immediately spray the stump. I might try starting some aspen cuttings to fill in where the prickly ash was. I am hoping I can whittle away at this problem over time to keep it under control.  Oh well, I guess I will have to spend more time in the woods…..