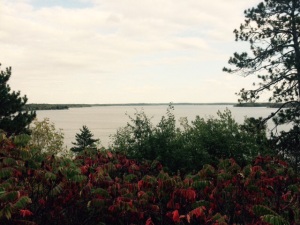 A few weeks ago, as Mel and I were returning from my nephew’s birthday party in northern Wisconsin, I suggested we make a side trip. We were in no hurry to get home, so Mel agreed.

“Where are we heading?” she asked.
“Sandy Lake; it’s near McGregor.”I replied.
“What’s there?”
“I don’t know – hopefully something telling about the history of the place.”

Instead of heading out of Duluth on Highway 2, we took Highway 210 to McGregor, then turned north. We saw no signs indicating any historical sites ahead but I thought there had to be something commemorating the place in Minnesota’s history. I got on my smart phone (Mel was driving) and googled Big Sandy Lake. Just as images of historical markers popped up, we happened by those very markers along Highway 65.

The markers are located at a wayside rest with a beautiful view of the lake. For some reason, the wayside rest was barricaded off, but we parked on the shoulder and walked in. I was surprised to find a detailed description of the Sandy Lake Tragedy that pulled no punches regarding the white leaders involved. The marker clearly describes the motives of Territorial Governor Alexander Ramsey and how the Ojibwe were wronged. High school history classes in Minnesota discuss Ramsey as a prominent figure in the state’s formation. I wonder whether his role in the Sandy Lake Tragedy is talked about in those history classes…. 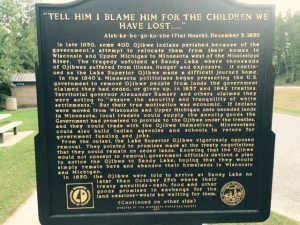 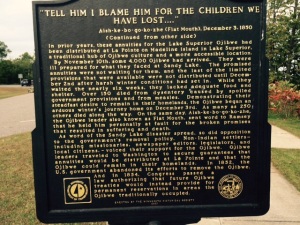 We continued north toward the area where I read the old trading post was once located. Another surprise: a well-maintained recreational area at the outlet of the lake. The Corps of Engineers maintains a flood control dam at the outlet and has developed an attractive park, including more historical markers. 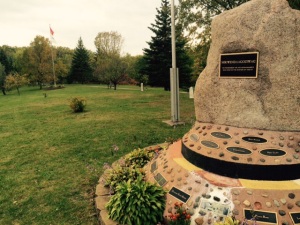 The most recently installed marker, commemorating the Sandy Lake Tragedy, was established by descendants of the victims representing several Ojibwe tribes. Called the Mikwendaagooziwag Memorial, it stands on a small knoll that also is home to a very old cemetery. 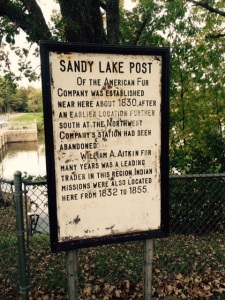 Based on the information on all the markers, it became clear that the main Ojibwe village was located here or very close nearby. The missionaries Frederick and Elizabeth Ayers established a mission here in 1831, and later moved it to Fond du Lac in 1834. Interestingly, the Ayers missionary life paralleled the journey of our family. Prior to Sandy Lake, the Ayers served at LaPointe, and they later appear in the 1849 territorial census somewhere north of Little Rock Lake, as the nearest neighbors to Antoine Blair. Whether there this is coincidence or there is a real connection between the Ayers and our family depends whether Alexander Blair was French Canadian or Scottish. If he was from Scotland, he would likely have been Presbyterian, like the Ayers. On the other hand if he was French Canadian and Catholic, he and his family would have had very little to do with the Protestant missionaries.

According to the historical marker on-site, the cemetery includes Indian and non-Indian graves. The marker clearly points out that, although the small hill resembles a burial mound, it is a naturally occurring glacial feature. Only two gravestones remain, both of which are dated in later settlement days. As I reflected on this information, it occurred to me that Alexander Blair and other members of our family may have been buried here. 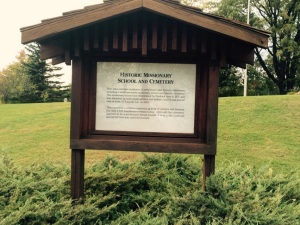 Given its strategic location on the portage between the Mississippi and the St. Louis River and Lake Superior (Savannah Portage State Park is located near the lake’s northeast corner), one can imagine this area bustling during the height of the fur trade. Early American explorers, including Zebulon Pike, Stephen Long, William Cass and eventually Henry Rowe Schoolcraft, all stopped at Sandy Lake to rest and re-supply. The members of our family who lived here witnessed a very important era in Minnesota’s history. The same can be said for the family members who later settled at Watab, which will be the subject of my next post.

One thought on “A Visit to Sandy Lake”