Of all my experiences with Grandpa, our Canadian fishing trips had the most profound effect on me. Spending a week traveling to and camping in a wilderness in the Canadian Shield country, fishing for dinner, soaking in the beauty of the place, gave me a lifelong appreciation for the natural world. The Whiteshell country shaped who I am.

Whiteshell Provincial Park contains over a thousand square miles of rivers, forests, bare rock outcrops and crystal clear lakes and is located east of Winnipeg, Manitoba along the Ontario border. The area is essentially the western end of the Canadian Shield country that extends eastward through the Quetico-Superior country, the Boundary Waters and beyond. The exposed rock or shield is some of the oldest rock on the planet. 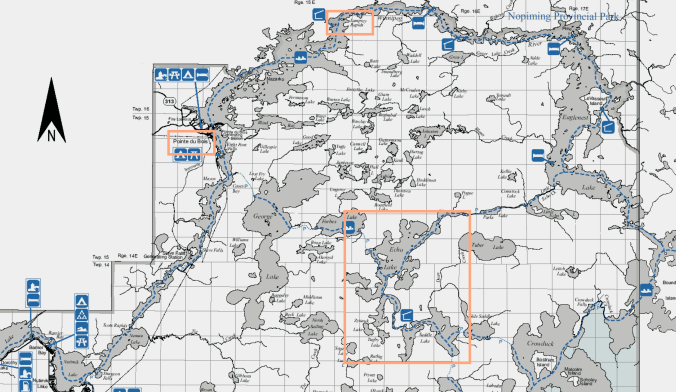 The Whiteshell is named after the megis shell, a sacred object central to the origin stories of the Ojibwe. The area is known for its petroforms, which are rock alignments in the shapes of turtles, snakes, humans and other forms that historically may have been used by the Midewiwin or Grand Medicine Society of the Ojibwe, and probably are still in use today.

Our trips through the Whiteshell followed the Winnipeg River along the northern border of the park. This route was heavily used during the fur trade era, linking the Great Lakes to interior Canada.  The north half of the park is roadless wilderness, with only a handful of fly-in resorts and trail shelters for development. Our trip upriver was the most adventurous part of the journey. Dad, Grandpa and I traveled on Grandpa’s 14-foot Lund boat packed to the gunwales with gear, gas, food and beer some 40 miles. Grandpa’s boat was powered by an old 10-hp Johnson motor. He had a 3.5 hp Johnson motor that conveniently folded in half for storage, as a backup. That durable little motor is now in my garage.

Leaving Pointe du Bois, just above a large hydroelectric dam, at dawn we weaved our way among the many islands along the river to Lamprey Rapids. Here we had a choice of shooting the rapids or portaging around them.  If the water was high, the rapids were barely discernible and easy to traverse. In low water years, we typically unloaded a few critical items from the boat and then hand-towed it along the edge of the rapids to the upstream side.  We had good reason to use caution. Grandpa recalled a time when he and Grandma encountered another couple at the rapids who had been drinking. They later learned the couple drowned attempting to shoot the rapids.

Above Lamprey Rapids, we continued upriver, Dad reading an old map and pointing out the route to Grandpa. The dotted line on the map showed how to weave through the islands and outcrops. At the outlet of Eaglenest Lake, the river again shallowed and numerous rocks just below the surface had to be avoided. At the south end of the lake we reached Little Echo Creek and followed it back west. We traveled through a couple of smaller lakes to reach a falls and portage around mid-afternoon.

The portage, although only about 500 yards long, was the toughest part of the trip. We unloaded our boatload of gear and packed it over the rocky trail, making innumerable trips. On my first trip, at age 12, I thought we would never finish! I was stripped down to my long underwear, sweltering even though it was only late May.

The worst part was lugging the 14-ft aluminum boat up the portage. Dad grabbed the bow line and pulled it over his shoulder until the bow lifted up. Grandpa and I each took hold of the handle on each side of the stern. We would go about 20 steps, put the boat down and rest. We attempted to make the work lighter the next trip by inserting two aspen saplings through the seat braces to make like a wheelbarrow. Another year, Grandpa completed the wheelbarrow concept by welding up a wheel mounted to brackets which were in turn mounted to the boat. After thinking about this idea, working it up in his shop during the winter, and hauling it all the way upriver, Grandpa was convinced it would do the trick. But it didn’t, and the contraption probably still lays in the woods next to the trail where Grandpa discarded it.

Finally, after getting all our gear over the portage and reloading the boat, we were on the northeast arm of Echo Lake, our destination. The lake was incredibly beautiful, with many high cliffs, tranquil bays and incoming streams. Even though a wildfire several years before had burned off much of the timber, all the rocks and water, the sheer wildness of it – I was enthralled.

On my first trip, we camped on a rocky point near the south end of the lake. This was the site of an old trappers cabin that Grandpa and a group of friends leased back in the 1950s. Unfortunately, over the years more friends and friends of friends abused the privilege, leaving behind trash and letting the cabin fall into disrepair. Park rangers eventually burned it down. We set up an old army tent on the site, built a temporary table against a tree for washing dishes and preparing meals and gathered downed wood for the campfire.

I’ll write more about our experiences at Echo Lake in my next post.