The excavators began work on our home site the week before last. I happened to be at the cabin working on some projects when they rolled in with a huge excavator on a flatbed trailer. Ron Gertz, the excavating contractor, introduced himself and immediately started asking about how the house would be laid out. He told me he needed to develop his own mental picture of what the final grade on the site should look like. We spent a lot of time putting stakes in, measuring and laying out the corners to guide the initial excavating. 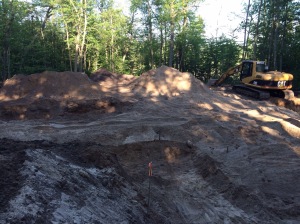 Ron was concerned that the approach I cleared did not provide the right angle for approaching and entering the garage. He quickly came up with the idea for a circular driveway that would provide the right alignment for the approach as well as improve traffic flow. He even jumped in his skidsteer and quickly brushed out the outline for the driveway. After spending some time with him on-site, it became clear to me that Ron had plenty of experience at this and was quite meticulous. He may come off as a humble farm boy, but he has an engineer’s eye. 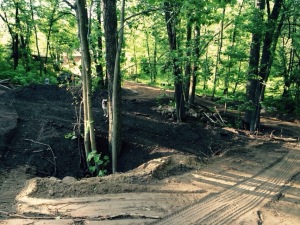 The circular driveway in progress

I went to the site a couple of days ago to check on progress. It was early evening and Ron’s crew had gone home. The circular driveway looked mostly complete, perhaps requiring another course or two of pit-run gravel. The crew had been working on digging the frost footings. Because of the slope, the excavation was over 12 ft deep on the southwest corner.

I found the exposed profile of the excavated hill fascinating; my training in soil science, which I hadn’t used in about 20 years, suddenly became relevant again. The ‘A’ and ‘B’ horizons (topsoil and subsoil) are almost 2 ft thick in places and look extraordinarily rich to someone who is used to working with the thinner soils of the western US. The underlying layer or “parent material” on which the topsoil developed, consists of sand and gravel and ranges from 3 to 6 ft thick. This layer contained a lot of rocks, from grapefruit-sized to over 2 ft in diameter. These were rounded smooth, which is typical of glaciated materials found throughout this area. The excavating crew is separating and stockpiling the rocks for our future use, as we requested. No need to buy expensive rocks for landscaping here! 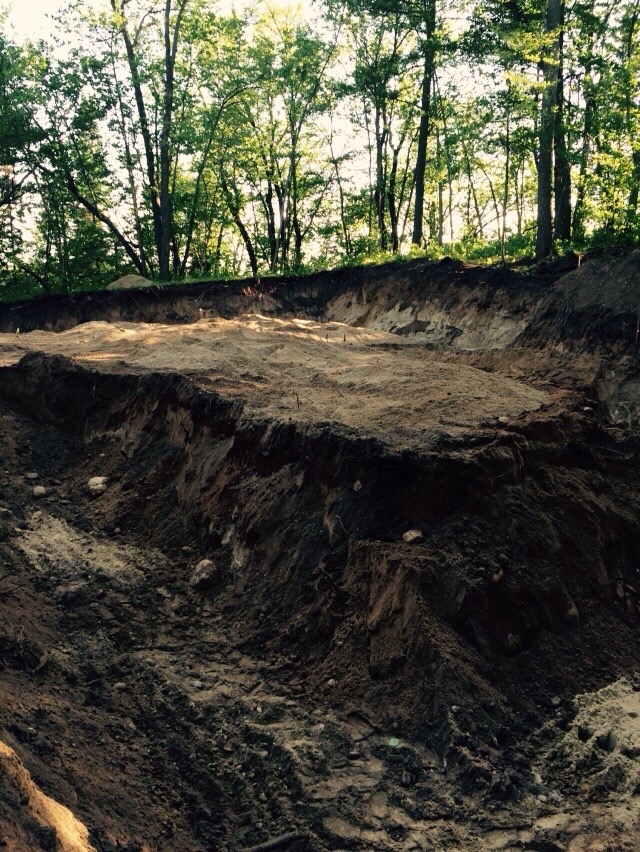 Footings excavation. Note the whitish layer at the bottom in the background.

But the really interesting feature of the excavation is the nearly white sand at the bottom. Ever since we bought this place 8 years ago, I have wondered how our little knob was created. The shoreline along the rest of the south side of 5th Crow Wing is relatively flat, but our hill rises up abruptly about 25 feet above the lake’s high water mark. It is generally round in shape at the base, with a curving crest shaped like a whale’s back. According to Wikipedia, this feature may be considered a “kame”, which is formed when material that has accumulated in a crevasse or hole in a glacier drops out the bottom as the glacier recedes. But a kame is usually made of unsorted material, which would not explain the clearly defined sand layer beneath the unsorted gravel. 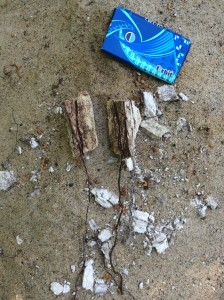 Perhaps the underlying geology of our home site was an ancient sand dune that was later covered by till deposits. This sand dune could have formed along the edge of a lake during an earlier glacial period. Similar sand dune formations can be found, for example on the north side of Height of Land Lake in Becker County. Unfortunately, there is no geologic map publicly available for Hubbard County that would shed any light on what the glaciers were up to in our immediate area. The geology is important to consider when siting our septic system and well. The layers of topsoil, gravel and sand should work well as a filter to keep our sewage from affecting our drinking water and the lake.

The sand itself is beautiful stuff – clean and bright. It is what is known as “sugar sand”, a highly desirable material for rebuilding beaches. I joked to Mel that maybe instead of building a house we should open a sand mine. She didn’t think that was funny.

Right now our home site looks like a giant sandbox. I suggested that Emily haul some of that beautiful sand to the other sandbox for the kids.

One thought on “A Giant Sandbox”